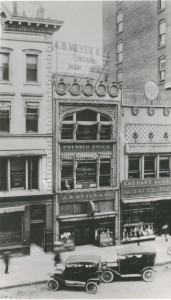 Long before the 1900’s, the entrepreneurial spirit of the Meyer family existed in a variety of business enterprises. There was a tobacco shop, barbershop, and flower shop. Pictured here is the A.B. Meyer Coal Company dating back to 1923. As the use of coal started to decline, the Meyers became involved in building supplies and limestone. They later discovered the dust from the crushed limestone was a desired product as a fertilizer, paint pigment, a filler in resins, and even chicken feed.

Charles F. Meyer, Jr. (center) developed a passion and expertise for selling the crushed limestone throughout the state of Indiana. In June of 1950, he incorporated his company and named it Meyer Materials, Inc. In 1951, his son Fred (right) joined the business, and then in 1957 his youngest son, John (left), became a partner. This was the humble beginning of our company.

In the early 60’s, the Meyer boys discovered fiberglass reinforced plastics. They were on the cutting edge of technology with this product and traveled the entire state teaching companies how to use this product. Many of the local boat companies became customers.

It wasn’t too long before Meyer Materials, Inc. had the knowledge to begin blending their own plastic resins. They began selling a two-part epoxy glue that hardened in thirty minutes and called it “Snappy”. Their logo was a turtle with a teardrop on the shell. John told the story of securing a large account that said they would buy the glue, but the turtle and the name Snappy had to go.

Throughout the 60’s and 70’s Meyer Materials, Inc. grew into a full line plastic distributor and sheet fabricator. The Meyer name was recognized as an honest, dependable source for plastics, sign materials, adhesives, mold building materials, and silicone products. Customers also knew that if they had to have a special part made, the folks at Meyer were the ones to call for cutting, routing, polishing, and vacuum or drape forming. With more emphasis on the plastics business, our name was changed to Meyer Plastics, Inc.

In 1982 Ralph Meyer joined his father, John, in the company. His first assignment was working in inside sales. Ralph was a graduate from Southern Methodist University with a post graduate degree from Indiana University. Through the next several years, Ralph experienced the various areas within Meyer Plastics, Inc. and was able to add his engineering and manufacturing knowledge to the company. Ralph later became President in 1995 and CEO in 2013.

In the late 80’s and 90’s it became clear that we could serve our customers better by establishing branches in strategic locations. Our customers wanted us closer for quicker delivery, so we added branches in Lafayette and Fort Wayne. We also established the Plastics Center as a rapid response location for walk-in customers.

Family owned and operated for over 65 years, Meyer Plastics, Inc has strong roots in the Indianapolis area. We were founded on the principles of a firm handshake, personal relationships, and quality products. Today, we are proud that these principles continue to drive each of our customer and supplier partnerships, which makes Meyer Plastics, Inc. “Your Plastics Solution Partner since 1950.”